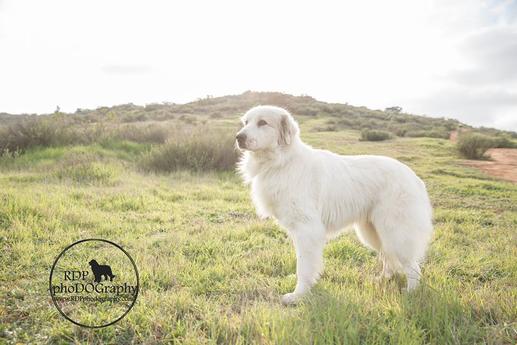 EARLY HISTORY:  Known as Le Chien de Montagne des Pyrenees in its native habitat (the Pyrenees Mountains between France and Spain) and as the Pyrenean Mountain Dog throughout Europe, the Great Pyrenees is one of the oldest breeds in the world. While similar in size and stature to the Mastiff family, the Pyr is actually descended from the ancient large, primarily white, livestock guardian dogs of the Middle Ages and developed parallel to most modern breeds of dogs.  The Pyrenees has remained virtually unchanged physically and mentally for hundreds of years, meaning that the breed has relatively few health problems in comparison to modern dogs.  Pyr remains are found in fossil deposits of the Bronze Age (1800 and 1000 B.C.)  It is believed the breed originally came from Central Asia or Siberia following the migration into Europe.  Of both Basque shepherds and French royalty, it was in the Pyrenean Mountains and French royal palaces that the Pyr developed its inherent traits of devotion, fidelity, sense of guardianship, and intelligent understanding of mankind.  Anything that threatened flocks learned to respect these flock guardians.  With their ability to scent, to see, and to sense danger, many a shepherd and child, have owed their lives to these loving companions.

A SERIOUS WORKING DOG—A FLOCK GUARDIAN:The Pyr’s imposing size, strength, courage, and resistance to the elements proved invaluable to shepherds.  The heavy double coat shields the dog from rain, wind, snow, sun, and predators. The Great Pyrenees is highly intelligent and independent.  It requires no human intervention while in the field. The breed’s effectiveness as a guardian is an inherited, instinctive trait.  As such, it does not require training beyond the socialization of the dog with its flock or as a companion dog with its human family. The Pyr is a versatile breed, making it a great companion or watch dog.  Its calm nature makes it easy to train, and it naturally adapts to pet-assisted therapy service in schools, hospitals, and senior centers where the Pyr knows exactly what the person visited needs and what to do.  Some have brought patients out of comas, school children out of fear of learning to read, physically challenged individuals out of insecurity, senior residents out of isolation and lack of social interaction, and Alzheimer’s victims out of  lack of affect and communication.  With its placid nature, the Pyr calms what could be traumatic catastrophes in various settings.  Actually touching a Pyr contributes to lowering blood pressure and raising endorphins; this has been verified with objective blood testing before and after visits.

LOVING COMPANION:  Of all the flock guardian breeds, the Pyr is by nature the best with people, offering a great tolerance and affection of adults and children, if properly socialized and trained.  The well-socialized Pyr makes a loving, loyal companion, and effective watch dog.  Naturally calm and well-mannered, it is usually quite tolerant of other pets with whom it has been raised.  Pyrs have a special love of children.  Although very independent, a Pyr is also easily trained and has a unique personality that Great Pyrenees owners worldwide have grown to love.

GENERAL TEMPERAMENT:   The Pyr’s calm, placid nature has allowed it to gently roam in and out of its flock, without raising alarm.  The exception to this is if the Pyr perceives a threat to its flock or family.  Then, the Pyr quickly changes gears and aggressively investigates and deals with threats without hesitation.  Highly intelligent, perceptive, and independent, a Pyr will act upon these strong instincts, even to the chagrin of its owner.  This is not a breed for a first-time dog owner. Although a Pyr is adaptable to different climates, it prefers cooler temperatures, and extremely hot climates should be avoided given its heavy coat.  On warm days, it is common for the Pyr to dig holes, which can be 1 foot down and 2 feet across, in order to rest in the cooler earth.  But, some Pyrs never dig at all.  On warmer days, the Pyr will be less active and prefer to just rest until it cools down.  Pyrs like to play at dawn and at dusk.  In the first snowfall, it is not uncommon for an older Pyr to play-bow or bound around like a 6-month-old pup.

INTELLIGENCE AND TRAINING:  Highly intelligent and perceptive, a Pyr can sense even the most subtle mood changes in both humans and animals.  This, among other traits, allows the Pyr to sort threatening animals and people from non-threatening.  Although easily trained, the Pyr’s strong independence may need extra, patient training and socialization.  Quick to learn, a Pyr becomes easily bored if commands are repeatedly repeated!  Not a come-sit-stay-rollover-fetch dog, it will usually pass on such as it doesn’t see the point of wasted energy.

PHYSICAL CHARACTERISTICS:  One of the most beautiful dogs in the world, its principally white, large, and muscular body structure defines it as a captivating and elegant breed.  But, a Pyr is more than a pretty face!  A well-proportioned Pyr with its full winter coat appears to be larger than it actually is.  There is a wide range of sizes in the breed, and a Pyr’s expected lifespan is 10-12 years. Bred for strength and endurance, a Pyr will usually conserve its energy until needed.  Naturally nocturnal, it prefers to sleep during the day and be active at night patrolling home and yard.  Due to the barking and nighttime activity, it is best to have the Pyr sleep inside with you so as to not disturb neighbors. A moderate amount of exercise is needed and can be satisfied with several hours outside with children or other dogs, or an enjoyable walk with you.  Pyrs recognize other Pyrs and usually react more openly to them than to other dogs.  The primarily white, double coat of a soft undercoat and thicker outer coat provides a waterproof barrier from wind, rain, snow, and sun, as well as protection from the teeth of predators.  The undercoat will be shed or blown once a year, usually in the spring, which requires extra attention to ensure it is raked out to avoid mats.  Coats vary in texture from the coarse working coat to “cotton candy”, very soft coat, and, as such, need different care.  However, Pys shed some dog fur every day.  Because this fur lies on the top of carpets or other flooring, furniture, and clothing, it is easy to see and sweep up or brush off. Weekly combing or raking keeps the coat in shape, and teeth and ears need to be checked to keep them clean.  The coat possesses dirt-resistant qualities allowing it to shed dirt or mud once it dries.  Although Pyrs can be all white, most tend to have some degree of grey, badger, or beige markings.  Coloration tends to be heavier during puppyhood, gradually lightening during maturity.  The breed’s trademark double dew-claws, 2 extra toes, are found on the inside of the back legs.  Since these claws do not come into contact with the ground, periodic trimming is needed to avoid becoming ingrown. These extra toes are attached by bone and are NOT to be removed unless there is an underlying medical cause. Single sets of dew-claws are on the front legs.

​Thank you for taking the time to read about our exceptional breed.  Additional information, currently available Rescue dogs, and adoption applications are on this website.

All About the Great Pyrenees Breed